I call it Adam’s Rib.
This is the first fossil to be identified – when my eyes suddenly opened after 11 years of collecting the weird shaped stones. I realised that this was a petrified rib of some creature, not just a weird thin stone that did not make any sense in the geological landscape in which it was found. 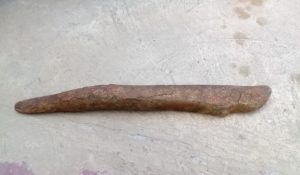 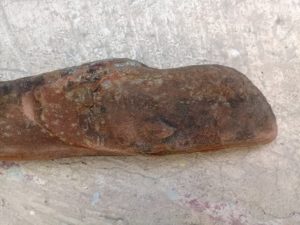 In January 2018, I hosted the first Stone Circle Research Expedition. 12 people from several countries joined me for this unforgettable experience and historic discoveries. On the first day we made the breakthrough discovery that changes everything we thought we knew about our history on Earth and the dramatic events that took place here in South Africa.
I realized that the mountains of weird-shaped stones around me, were petrified body parts of all kinds of creatures. It is impossible to distinguish which fossil belongs to which creature, but we have identified fossils of dinosaurs, reptilian creatures, humanoids, and giants. The giants range from 3m to 50m to as large as 150m tall.
Many people and scholars will take a while to come to terms with this. But a visit to the Stone Circle Museum will make it all real. Once people have seen and touched the fossils – and gone up the mountain to see the giant fossils, some of which weigh over 100 tons, it all become very real, for everyone.
Then, a personal journey of awakening usually begins.
Come see the Museum and take a tour of the ruins and the giant remains among the mountains around Waterval Boven – Mpumalanga, South Africa. A whole new reality awaits you.
Book with Melissa on info@stonecircletours.co.za – see out website https://www.stonecircletours.co.za/
Join my VIDEO channel for hundreds of videos and discovery as it happens – Click Link Below: https://michaeltellinger.vhx.tv/
Keep exploring – Michael Tellinger
By Michael|2021-02-10T04:24:05+02:00February 10th, 2021|News, Research|Comments Off on ADAM’S RIB – The strange stone that changed South African geology forever