A Time Before The Moon Was In The Sky

A Time Before The Moon Was In The Sky

Many ancient people spoke about a time before the moon was in the sky – Aristotle, Democritus and Anaxagoras, Apollonius of Rhodes, Hippolytus and more. Now that we know the moon is not what we see – that a hologram hides the true body behind it – it becomes critical to question what the moon really is – what is the hologram hiding? And when did the moon appear in the sky? Here are some references and a video of the famous Lunar Wave – from Crow 777 that clearly show that the moon is some kind of hologram. No moon landings possible – all moon landing images are simply Hollywood productions. So – where do we go from here?
The period when the Earth was Moonless is probably the most remote recollection of mankind. Democritus and Anaxagoras taught that there was a time when the Earth was without the Moon.(1) Aristotle wrote that Arcadia in Greece, before being inhabited by the Hellenes, had a population of Pelasgians, and that these aborigines occupied the land already before there was a moon in the sky above the Earth; for this reason they were called Proselenes.(2)

Apollonius of Rhodes mentioned the time “when not all the orbs were yet in the heavens, before the Danai and Deukalion races came into existence, and only the Arcadians lived, of whom it is said that they dwelt on mountains and fed on acorns, before there was a moon.” (3)

Plutarch wrote in The Roman Questions: “There were Arcadians of Evander’s following, the so-called pre-Lunar people.”(4) Similarly wrote Ovid: “The Arcadians are said to have possessed their land before the birth of Jove, and the folk is older than the Moon.” (5) Hippolytus refers to a legend that “Arcadia brought forth Pelasgus, of greater antiquity than the moon.”(6) Lucian in his Astrology says that “the Arcadians affirm in their folly that they are older than the moon.”(7)

Censorinus also alludes to the time in the past when there was no moon in the sky.(8)

Some allusions to the time before there was a Moon may be found also in the Scriptures. In Job 25:5 the grandeur of the Lord who “Makes peace in the heights” is praised and the time is mentioned “before [there was] a moon and it did not shine.” Also in Psalm 72:5 it is said: “Thou wast feared since [the time of] the sun and before [the time of] the moon, a generation of generations.” A “generation of generations” means a very long time. Of course, it is of no use to counter this psalm with the myth of the first chapter of Genesis, a tale brought down from exotic and later sources.

The memory of a world without a moon lives in oral tradition among the Indians. The Indians of the Bogota highlands in the eastern Cordilleras of Colombia relate some of their tribal reminiscences to the time before there was a moon. “In the earliest times, when the moon was not yet in the heavens,” say the tribesmen of Chibchas.(9)
See the mind-boggling Lunar Wave video here: https://www.youtube.com/watch?v=0u5Bh5PJGuI&t=38s 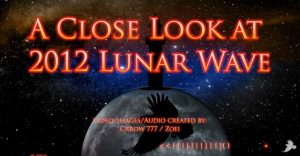